Who Doesn’t know the south Indian star Vijay Devarkonda whose movie Arjun Reddy is rocking all over the country. He made his debut through Nuvvila movie but gained the attention through the movie Yevade Subramanyam. He got fame through his first lead role movie Pelli choopulu.

He acted in very fewer movies but made everyone awe by his acting skills. His performance in Arjun Reddy won him several awards, including the Filmfare Award for Best Actor – Telugu. Arjun Reddy is remade into Kannada, Tamil , and Hindi. In Hindi, it became a blockbuster hit by collecting a huge amount of 250cr. Sahid Kapoor has played the Hindi lead role as Kabir Singh. Dear Comrade and Hero are the two films now in his hand, soon the dates will be announced. Dear Comrade trailer had been released by the team on 11th July. The movie is going to be released in theatres on 26th July in Telugu, Tamil, Kannada and Malayalam languages. 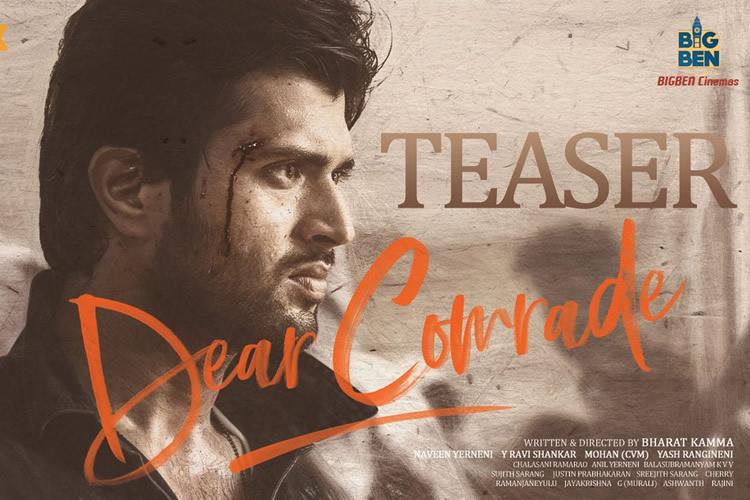 His younger brother Anand Deverakonda is going to make his debut through Dorasani movie in Telugu. Dorasani theatrical release is on July 12th, 2019. Vijay has attended his brother’s movie audio launch and gave an emotional speech by memorizing the struggling days of him and his family.

Dear Comrade is directed by Bharat Kamma which is produced by Mythri Movie Makers and Yash Rangineni. Dear Comrade is Vijaya Deverakonda’s film in the Telugu language filled with action-drama. Justin Prabhakaran composed the music for the movie. The starring of the movie is Vijay Devarakonda, Rashmika Mandanna, Shruti Ramachandran, Jayaprakash, Brahmaji, Sukanya, Rao Ramesh, Raghu Babu, Anish Kuruvilla and many more actors.

For now you can have a look at Dear Comrade Teaser below :