The dubbed version of Telugu blockbuster movie, Rangasthalam, released in Kannada as “Rangasthala”. The Ram Charan – Samantha starrer is expected to set a screen on fire over the next few weeks. This is one of the few Telugu films that got dubbed into Kannada. Written and directed by the talented Sukumar, Rangasthala is a story of a young man with hearing impairment.

Telugu version of the movie was released on 30th March of 2018. It received a massive positive response from the audience. The critics showered applause over Sukumar’s writing and Ram Charan’s acting. Fans were delighted to see their hero in such a massy and interesting role.

Music of the film is also a blockbuster. There are six songs in the movie all directed by Rockstar Devi Sri Prasad. The background score is also brilliant. Kannada versions of these songs are already out on YouTube. The much-applauded cinematography of the movie is done by R. Rathnavelu. 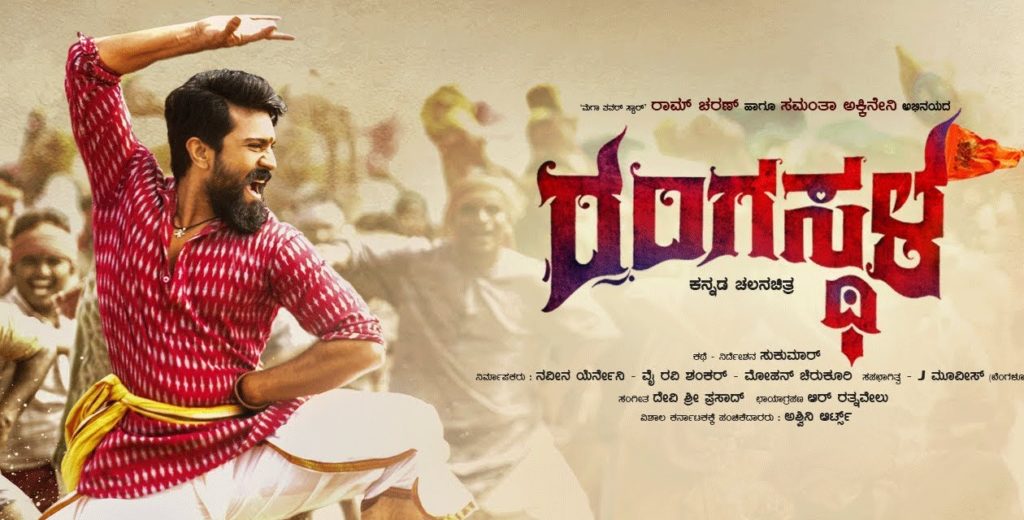 Naveen Yerneni, Y. Ravi Sankar and Mohan Cherukuri have produced the movie under the banner of Mythri Movie Makers. The movie is made with a budget of ₹60 cr and it collected over ₹210 cr making it an all-time blockbuster in Telugu. It would be interesting to see how much it will be collecting in Kannada.

The film starts off on an interesting note, where the Prakash Raj character gets into an accident and goes into a coma. After that, you will be introduced to the place, the character and the lifestyle of Rangasthala. The film revolves around its hero Chittibabu, played by Ram Charan. The production value of the film needs to applauded. The film gives you that vibe of a village set in 1985.

Then the director gets you involved in the love story between Ram Charan’s and Samantha’s characters. Along with this, you will be shown what role Jagapathi Babu’s plays. He plays a high caste village head who does a lot of religious poojas and illegal things.

As the corruption and illegal things the village head’s team does go on, the Ramcharan character and Aadhi Pinisetty’s character decide to fight the village elections. Then the real story starts. The vision of Sukumar is perfectly handled by cinematographer R. Rathnavelu. You will be treated with songs of Devi Sri Prasad which have an authentic feel to them.

Overall, the film is a treat for those who love massy films. The songs, dances and the item number make the film a perfect family entertainer. Hope the Kannada people give the film as much love as the Telugu crowd gave.