Anand Kumar, the man who took the coaching industry by storm, he grossed the highest selection percentages in the IIT exams for years.

Deputy Chief Minister of Bihar Shri Sushil Kumar Modi announced on Monday that no entertainment tax will be levied on the film. Sushil Modi was attending a special screening of the film organized specifically for him and other ministers, where he was accompanied by Anand Kumar himself. After the screening, he announced that Bihar government will not be charging any entertainment tax on the tickets of this movie. 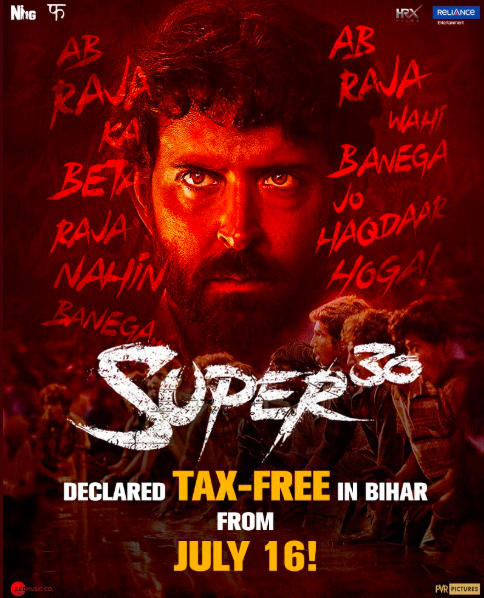 The story of this film revolves around Anand Kumar who was determined to help the poor children from the backward regions of Bihar who wanted to pursue engineering from the topmost institutions of the country but were not able to get themselves enrolled in the costly coaching institutes. He provided them with the quality education that too free of cost in batches of 30 and most of them passed with flying colors.

The film is proving to be a great success with an opening of 11.83 crores the film has made a collection of 50.76 crores till the close of Monday. The step of the Bihar government to not to collect entertainment tax on this particular film will help to reduce the prices of tickets.

Reduced prices of tickets on account of the removal of entertainment tax will encourage more crowd to come out of their homes and mark their presence in the cinema halls in great numbers.

Anand Kumar thanked Shri Sushil Modi from his Twitter handle stating that this step of the government will help more and more audience to watch the tale of the students who despite all odds came up shining and conquering arguably the toughest exam of the country.