Considering other Tamil movies releasing on July 12, Bodhai Yeri Budhi Maari is the smaller one comparatively. Yet the trailer of the movie promises you a content-driven thriller drama. The movie stars Dheeraj, Radha Ravi and Pradaini Surva in lead roles and it might hit big this weekend.

A man visits his friends a day before his wedding and ends up taking a potent drug. How does this change his life? – this is the synopsis of the movie. And if you have watched the trailer, you will know what that means. This concept is produced by Sri Nithi Sagar under the banner Rise East Pictures.

Bodhai Yeri Budhi Maari is directed by a debutant, KR Chandru. You might be imaging a 23-25-year-old filmmaker when I said debutant but that’s, not the case here. KR Chandru is one such candidate who wanted to pursue filmmaking after school but it was not possible due to personal reasons, he says.

Talking about his movie, he said “The movie will have elements from several genres — horror, thriller, action, and emotional drama. After the interval, there are about four sequences of high octane action. It’s a proper commercial entertainer.” Chandru has made some short films, before making his first feature. 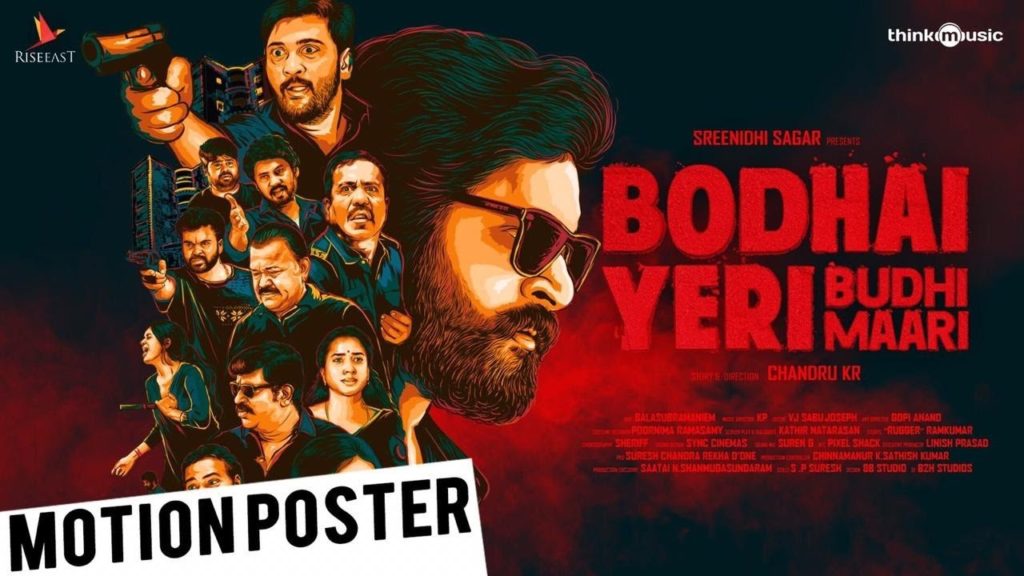 The music of the film is composed by K P, a few glimpses of his background score can be heard in the trailer. Balasubramaniam is the cinematographer. The trailer of the film is released on July 5, 2019. Which is 7 days before the release date. This might be a good move, we never know.

The film got a U/A certificate from the censor board. The runtime of the movie is said to be 124 minutes. The movie has a lot of elements – guns, drugs, love, rage, anger, gangster and family. So it’s going to be interesting to see how the Tamil audience receives it.

So what the director said is absolutely correct. The film cannot be classified into one genre. The film has everything. Romance, violence, guns, drugs, and whatnot. The main plot point the film runs on is drugs. The hero character starts to narrate the story right from the start. The screenplay of the movie is damn intriguing.

A movie like this demands strong performances from the actors and they deliver that. First time director KR Chandru has made a promising debut. The film speaks for him. The way he handled technical aspects is commendable.

The music is mind ducking. That background score drove the movie throughout. Credits to K P and the cinematographer who did a brilliant job. But it’s not all good, the premise is great, but the story turns into being unappealing for some time.

Yet, the film ends on a great note. This film is a public statement against drugs. You will be a little confused while watching it for the first time, but don’t worry, you will get it. I hope this film will be well received by the audience. Good luck to the makers.