Rajanikanth Starrer Big Budget movie 2.0 is again filling the news with the Chinese premiere of the movie. The events are getting a lot of buzzes all over India for 2 days now. The film also star Akshay Kumar and Amy Jackson in the lead roles.

The film had been released on not less than 10,000 screens in India last year, 2018. Even though it was a sequel to the immensely successful movie Enthiran (popularly known as Robot) and was made with a exorbitant budget of Rs. 543 crores with a lot of fans waiting, the movie got only mixed reviews. 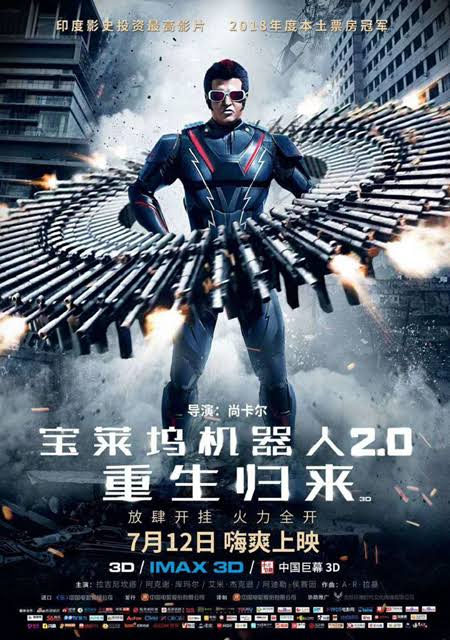 This time it is released in China, on September 6, in 48,000 3D screens, according to LYCA Productions. In the opening day, the movie got a very warm welcome by the Chinese, with a notable record in the collection on an opening day. But, it is witnessing a big dip from the second day itself.

According to trade analyst Ramesh Bala, reliable sources reveal that the movie did cross $2 million marks on its second day. On the second day, it recorded $0.61 million (Approximately 4 crore Rupees) in the collection. The gross collection for both days is now approximately 14 Crore Rupees. According to the newest data, it is $0.70 Million.

The opening day recorded $1.28 Million which is loosely 9 Crore Rupees in the China box office. The data from the two-day collection is totally inconclusive and the movies from India does take some days to get its pace in the Chinese market.

The trade analysts are not giving good reports as the movie is expected to be a disaster in China even with it releasing over 50,000 Screens. The movie has to bag three times its current collections to get even in China. The deviation of the movie theme from its basic Scientific story to a supernatural one made many negative comments and a bad reputation for the movie even in India also.